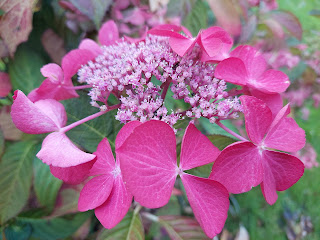 Temperatures are "exceptionally mild" for the time of year, with Scotland, Northern Ireland and Ireland all having the warmest November night on record. The temperature in Furnace near Newport never dropped below 15C on Friday and reached 18C during the day. Meteorologists say the mild weather is the result of a powerful jet stream bringing warm air up from the south as far as Cape Verdes. Average night-time temperatures in the British Isles at this time of year range between 4-6C. It's certainly a bonus for millions of people who are concerned about heating bills, but is it a sign of a permanent shift in weather patterns, and how much is climate change playing a part? Sea Temperatures off the coast of Ireland are almost at levels recorded during summertime, the head of forecasting at Met Éireann, Evelyn Cusack, has said . The unseasonably warm temperatures this month come after one of the wettest Octobers on record and the hottest summer in over 135 years. It's going
Post a Comment
Read more 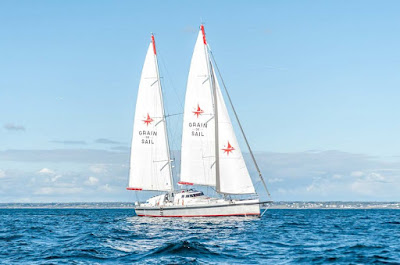 Cargo sailboats. Courtesy of Grain de Sail. It seems that sailors are working toward decarbonising the delivery of wine by shipping it via sailboat . In fact, our friend Jaime Young is converting his boat into a cargo ship for similar reasons. Perhaps we shouldn't be selling Aleria . Given that we have Daria's Vineyard and Alex's Apiary, our wine label will be called Aleria , and we are using all-natural no-till sustainable techniques to grow and harvest the grapes, it's all fitting together.   Hmmmm! Now all we have to do is figure out how to make decent wine.
Post a Comment
Read more 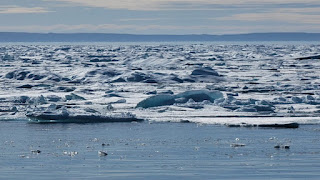 After several years of limited Arctic passage-making due to Covid restrictions, the Northwest Passage was once more hotly contested this year. It was a difficult year for ice as described by Victor Wejer who assists yachts transiting with ice and weather forecasts. Victor counted eight yachts amongst those successfully completing the passage in 2022.  Maiwenn Beadle, who is the captain of the “pleasure craft” Noorderzon , was apparently the skipper of the first pleasure craft to transit Bellot Strait this year. She has done so remarkably early and may be the first female professional captain to transit the NWP. Noorderzon  is a motor vessel (ex. tug) with some 300-ton displacement and with many paid tourists served by cooks.  The Great White Con blog covers all the known attempts including a small catamaran, a guy on a SUP, a group of kayakers from Texas, and a bunch of rowers, all of whom attempted and withdrew when they realised what they were up against. T he rowers rescheduled f
Post a Comment
Read more 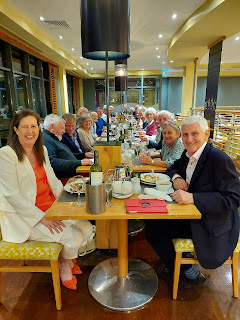 The first in-person meeting since Covid locked us down had the Committee members travelling from all corners of the island this past weekend. The weather was changeable but the mood was positive and focused on the long overdue face-to-face discussions. The committee members and their spouses descended on Athlone for a weekend of camaraderie, exploration and serious business.  We congregated first at Sean's, the oldest pub in Ireland, for refreshments and a chance to reacquaint ourselves with fellow members and partners we had not seen in a couple of years. Then on to The Left Bank for victuals and further re-establishment of connections.  The spice entertained themselves on Saturday morning while the Committee members went to work deliberating important decisions about the Club's current affairs and future directions. In the afternoon, Aoife Nolan-Beattie had arranged for a guided tour of the historic town of Athlone on the mighty Shannon River. It was a delightful storytelling
Post a Comment
Read more 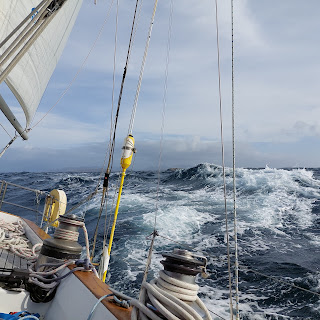 A weather window of sorts finally appeared this week to bring Aleria down to the Shannon from Clew Bay for her winter rest in Kilrush. Monday we'd have moderate northwesterlies, Tuesday we'd have moderate south-westerlies, increasing to fresh later in the day, and Wednesday we'd have little wind facilitating motoring up the Shannon. Moreover, the tides were favourable at both ends and the currents would carry us in the right direction most of the time.  We departed from our mooring shortly after 0900h and sailed briskly out of Clew Bay. As we approached Clare Island we saw that the weather forecast for Tuesday was deteriorating, with strong SW-lies now being forecast, building steadily through the afternoon and gusting to 40 knots or more around 11-12pm before calming way down. As we were heading SW, we'd have a very bumpy ride at best. Instead, we decided to forego the scheduled stop at Inishbofin and continue straight through to Inishmore where we'd have good prot
Post a Comment
Read more
More posts