Showing posts with the label Eigg
Show all 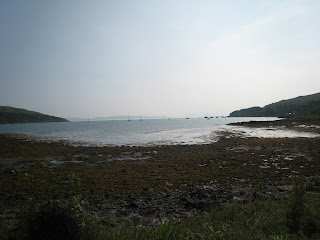 Castles, calderas, and wildlife on Rum
We sailed downwind out of the harbour to Ardnamurchan Point where the wind died, so we motored until the wind came back up. Lovely.   We were heading for the Small Isles, and the topography had changed significantly. The hills were more ragged and peaked. Ardnamurchan is the remains of a volcano, as are the Small Isles – Muck, Eigg, Rum, and Canna. We were heading to Rum which consists of huge peaks covered with forest. Very distinctive.  We wondered why it was called Rum and not Whisky, but we didn't find any answers.