Showing posts with the label deet
Show all 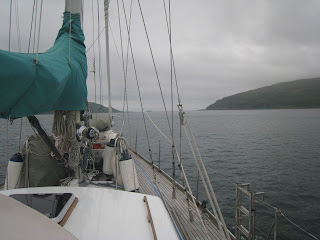 The Race, whirlpools, swell and ticks…dangers all around.
Aleria was among the first group of five boats to pass through the Corryvreckan and, even at slack water, the water was still boiling all around us as we passed through under power at almost 10 knots. Our speed through the water was only 5.8 knots as we raced over a 224 foot deep chasm that would soon shallow out abruptly. We were being set quite substantially.

We anchored in hard sand and weed in gorgeous Pig Bay (Bagh Gleann nam Much) just on the inside of the top of Jura with the Race's waters rushing past the opening to the Bay while inside it was calm and secure.  The Race extends out quite a distance, which is called an overfall here in Scotland. Luckily, there wasn't much wind, only about 10 knots, because when wind opposes tide, it can get very nasty, with standing waves and square chop intertwined.