Showing posts with the label videos
Show all

There has been an explosion of sailing videos on YouTube in the last few years. It seems that all the young people who have gone sailing are documenting their voyaging with vlogs instead of blogs, which appear to be so passe nowadays. Some have hundreds of thousands of subscribers who watch these videos that can be half an hour long. The best ones for me are under 10 minutes long, any longer and I get bored. YouTube has even created a list of top 30 sailing video channels.

Which anchor sets and holds best? 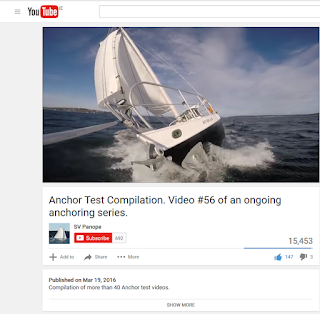 Anchor Video Series by s/v Panope
A recent series of anchor tests bears mention. Steve Goodwin from s/v Panope has created a series of videos in which he set out to answer questions he has always had about anchoring. He wondered what happened when he dropped an anchor to the bottom and what happened when the wind shifted or current reversed. Would the anchor hold, would it flip around and reset, or would it just pull out?