Learning to maneuver in tight spaces

- July 20, 2015
We're just getting ready to  spend a little time in marinas, which is always a source of consternation for us. We have a 40-year-old, 57-foot classic ketch with no bow thruster. She's got a modified fin keel and heavy displacement. In other words, Aleria doesn't maneuver very well in tight spaces. She is meant to be crossing oceans. That's one of the reasons we really like to anchor out.  But in reality eventually we're going to have to get to a dock for fuel, water, or overnight in the absence of a safe anchorage. So we have had to learn how to use what we have to get ourselves into tight spaces. Here are several techniques that we've found very useful.


Using prop walk to your advantage in docking 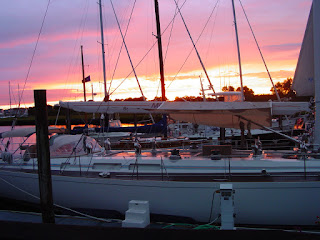 Prop walk is the tendency for a boat to rotate around its keel when first put into gear, and it is much more pronounced in reverse than in forward. Some props kick to port and some to starboard. First, you need to figure out what yours will do.

The first thing that prop walk is great for is docking.  If you know your boat kicks to port, then coming in port-side to can make you look like a real pro. Just come gently alongside within a couple of feet of the dock, put it into reverse, and gun the engine at about half throttle as you reverse your helm. Your stern will swing towards the dock as your boat stops its forward momentum and your crew will be able to step off the boat to secure the dock lines with ease.

Turning a boat in its own length

We were cruising up Long Island Sound one year when a tropical storm warning came through. We decided to take refuge in a marina but they only had space at a dock that required us to come into a tight lagoon with floating docks on three sides.  We had no choice but to turn her around in a space that basically involved turning her around in her own length. Luckily we had just read about the technique in a cruising magazine. 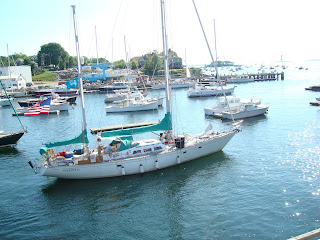 When a boat turns, the bow goes one way and the stern the other. Because the rudder is positioned aft, it is actually the stern of the boat being steered even though the bow is turning. When a boat is moving forward, a yacht pivots around a point about a third of the distance from the bow, roughly at the mast. When turning in tight quarters, therefore, it is important to watch your stern so it doesn't kick out into an obstruction.  When motoring astern, the pivot point moves to a point 1/3rd from the stern. Add in prop walk and you understand how important it is to monitor the bow when turning in reverse because it now swings the most.

Alex decided he'd be at the helm so I got fenders ready and chose a big one to fend off if we got into difficulty.  We went directly into the lagoon and stopped the boat while initiating a turn hard to starboard. Then he put her into reverse and gunned the engine. Her stern swung to port which we knew she did. He then put it into forward and revved the engine at about half throttle. Her bow swung gently but obediently to starboard. As soon as she started moving forward, he put her back into reverse, and so on. After about a dozen reversals, we were facing in the opposite direction, perfectly aligned with the dock. We had not moved forward or reverse, only pivoted clockwise around her middle. I had not needed to fend off, even though we came close to a protruding pulpit on one of the angles. 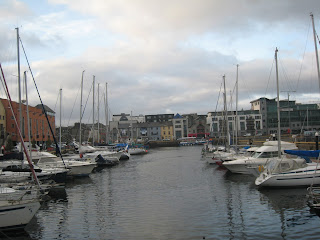 There was a crowd gathered watching us incredulously. Alex was in his element as he had executed the maneuver perfectly. We had to know that her prop walk was to port or it would not have worked. If you have starboard prop walk, you'll have to turn in a counter-clockwise direction.

This maneuver called a Pivot Turn works great in most instances. The US Navy calls it a "Back and Fill" procedure. You can find a description here.  Of course, when wind and tide come into play, all bets are off.  That's where the fenders to fend off with come into play, and I end up running from bow to stern like a madwoman. I'd rather be at the helm.

We've used this maneuver many times now in places like Galway Harbour in Ireland and tight marinas in the Atlantic Islands. So far it has worked very well and has gotten us into and out of some very tight spots. 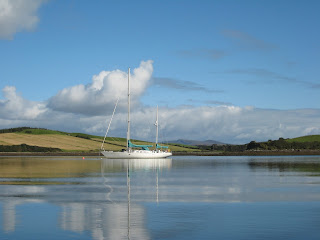 Aleria has a rather wide turn radius.  To pick up our mooring, which is at the confluence of a small inlet and a wider bay, we have to come in, usually with westerly winds behind us, turn around into the wind and come up on the mooring.  The depth of the hole in which our mooring lives is just enough for our keel at low tide but there are shallows to avoid nearby.  When we come in and the height of the tide is an issue, we need to make a tighter circle than Aleria usually likes to make to stay in the deeper water.  So I come in as wide as I can away from the mooring and when the depth starts dropping I initiate the turn.

But she'll never make it to the mooring in one shot with that radius at slow speed. So I give it a power shot.  Because our bow turns to starboard with prop walk, throttle gets me added steerage and the assistance of prop walk to turn her in a tighter circle. You do have to return to forward steering quickly though or you will end up over steering.  If the tide is dropping, then the current and prop walk will give me an added boost if I make the turn to starboard. If the tide is rising, and the current is strongly pushing into the inlet, I have to reverse the direction of the turn .

This technique works great when coming into a marina that requires a tight turn to approach a slip. Just remember to return the helm to straight ahead quickly and reverse to slow your self down so you don't bull's eye the dock.