When my husband Alex and I decided we wanted to cross oceans, we had certain criteria we wanted to take into account. Chiefly, we wanted a boat that sailed well, was comfortable and safe when crossing oceans and comfortable at anchor as well. After all, we were going to spend more of our time not moving than moving. But when we did move, we might be needing a stable platform in a storm.  That excluded many of the modern production boats, which tend to be beamy and flat. We also decided that we would be looking at ketch rigs.

To ketch or not to ketch?


Now a ketch might seem like an unusual choice in these days of sloop rigged boats. But my theory is that the sloop rig became dominant because more people were getting into club racing programs for the social side of sailing, and sloop rigs are faster, more efficient upwind sailing machines. Inventions like self-tailing winches made it reasonable to handle larger sail area easily.

Ketches were becoming outdated editions of boats that sailed across oceans long ago in the time when boats were, well er, boat shaped. Ketches were all about versatility of sail plan and ability to handle large amounts of sail in total by putting up smaller pieces that worked well together.

Naysayers were everywhere. Whenever we mentioned a ketch rig people, usually yacht club sailors who had never stepped aboard a ketch, would advise us against the ketch. "You can't point as high, you can't use the mizzen upwind because it backwinds off the main, and you can't use the mizzen downwind because it interferes with the main and/or spinnaker."  "Balderdash" is what we've said to them.

When we first got our Bowman 57 cutter ketch, we had the opportunity to take part in a few distance races -- navigator class and point to point. Everyone was amazed that our ketch not only performed as well as some of the sloops, it pointed almost as high.  Sail trim was key, of course, but we were only a couple of degrees off, and placed second in two races and first in another. And any boat to leeward of us had to suffer from "wind shadow" which in effect stopped them in their tracks.

Interestingly, some of the mega yachts are now being built as ketches. Perini Navi have just added another 60 metre to their lineup.

Sail inventory - ketch us if you can!

Our sail inventory is a classic ketch cruising inventory.

We've crossed the Atlantic three times and we are most grateful for the decision we made to opt for a ketch, and this one in particular.  Heading from Nova Scotia to Ireland, we had intense fog off the Newfoundland coast and had main, mizzen, yankee and staysail up. The wind kept increasing so we reduced in this order:
We sailed with the staysail and mizzen through 6 gales, and hove to twice. She handled brilliantly.  We hove to backwinding the staysail and kept the mizzen up. Perfect balance. We could have reefed the mizzen but didn't need to in 35-40 knots with higher gusts.  That's when I realized how stable she is, even when 57 feet gets to feel very small on a big angry ocean.

The second crossing from the Canaries to Barbados, the Azores high was getting increasingly bigger and dropping lower so the wind kept dying. We started with yankee, main and mizzen leaving La Gomera in 20 knots and kept adding more sail until we had every scrap up.

The staysail is actually a great sail. The yankee is the powerhouse, but the staysail creates a slot that dramatically increases lift. You can feel the difference. The mizzen staysail makes her look the most beautiful because it fills the deck area in for a more continuous sail flow.  It kept us going when the boats behind us kept dropping farther back. Some boats took more than a week longer than us.

That's the crossing  on which we also lost steering for some time. I stayed on deck adjusting sail trim and she basically sailed herself beautifully. That's when I learned to really trust her to take care of us and show us that she really knew what she was doing.

Our third crossing was from St. Martin to Ireland and once again we had light air. We flew the spinnaker for many days on that one. Although we usually take the spinnaker down at night, we had everything else up that we could through the night. We eventually had to motor for a spell although we really hate to do that.

The mizzen mast is great to lean against when on watch or maneuvering in close quarters.  It's also the perfect place to put a radome, a radar reflector or a spare antenna.

The mizzen boom is a useful derrick for lifting the dinghy out of the water. It's also a convenient place to hang the laundry. The aft deck that accommodates the mizzen rig is a great place to position deck chairs for your sundowner with a great view of the anchorage.

One additional advantage for the ketch rig is that you can use the mizzen sail as a stabilizer sail in a rolly anchorage. You wouldn't want to leave it up for weeks on end, but you could certainly use the mizzen mast to put up a dedicated riding sail.

Dead down wind, we tend to go 'wing and wing and wing' with the mizzen out on the same side as the yankee (with preventers on both booms of course). They are far enough apart not to interfere. We've seen people eyeing us with binoculars in confusion, perhaps trying to determine which tack we are on.

The mizzen as a safety device


If the engine fails and you need to set your anchor under sail, the mizzen sail can be your anchoring sail.  You can slowly and gently enter an anchorage given enough wind, turn into the wind, drop anchor, then backwind the sail to set the anchor.

Conversely, if you have the mizzen sail up when leaving an anchorage, should your engine or steering quit, you will have a sail up and ready for emergency maneuvering.  As ours is a centre cockpit model, the mizzen mast is conveniently right behind the helm, making control of the sail a rather simple operation.

A cutter rigged ketch like the Whitby 42 shown her will carry the following suit of working sails:~ 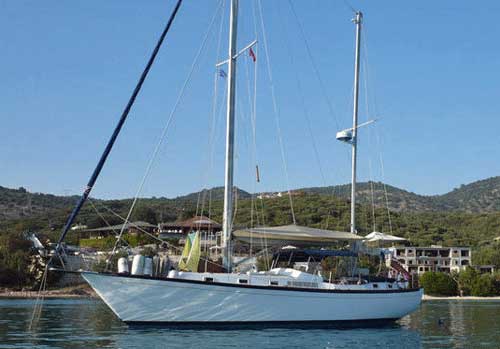 A cruising sloop of a similar size has only two sails to make up the same sail area, which would be considerably more difficult for a short-handed crew to handle.
So in answer to the original question, although they're not the best choice for windward sailing, the ketch can make an ideal cruising sailboat.
Lastly, the mizzen mast on a ketch sailboat provides an ideal place to mount your radar scanner and wind generator. And as one old sea-dog once told me, a convenient thing to lean against when you're smoking your pipe.
- See more at: http://www.sailboat-cruising.com/ketch-sailboat.html#sthash.SuCCnneO.dpuf

A cutter rigged ketch like the Whitby 42 shown her will carry the following suit of working sails:~

A cruising sloop of a similar size has only two sails to make up the same sail area, which would be considerably more difficult for a short-handed crew to handle.
So in answer to the original question, although they're not the best choice for windward sailing, the ketch can make an ideal cruising sailboat.
Lastly, the mizzen mast on a ketch sailboat provides an ideal place to mount your radar scanner and wind generator. And as one old sea-dog once told me, a convenient thing to lean against when you're smoking your pipe.
- See more at: http://www.sailboat-cruising.com/ketch-sailboat.html#sthash.SuCCnneO.dpuf

We have found the cutter ketch to be a very versatile rig for cruising short-handed. The mizzen sail and rig provides us with a lot of flexibility and utility both under sail and at anchor.  The cutter configuration really powers her up. And the choice of sail options has allowed us to sail balanced in many different conditions.  As we wrote in Cruising World, Aleria is "quite the ketch".