- January 31, 2016
My winter is being spent investigating topics for new articles.  One that is often overlooked is what are the main medical emergencies that sailors face.  Being prepared means knowing what you might have to deal with.

I had written before about the different medical emergencies faced by racers and cruisers. In that case I was concerned with coastal cruisers more than distance and blue water sailors.

A new survey has documented the types of injuries faced by extreme sailors. Although it mostly covers distance racing, the results can be extrapolated to distance cruising. The excellent summary presentation by Dr. Andrew Nathanson of Brown University concludes that sailing is one of the safest sports with far fewer injuries than five major sports including baseball. And the number of deaths is less than the number in football. Shouldn't these statistics be propagated among the non-sailing critics? Contusions and lacerations are the most common injuries.

(I would love to know where he got the statistic that there are 7,790,000 sailors. Is that in the US? Worldwide? The deck doesn't say.)


Who hasn't been hit in the head by the boom or a flailing sheet at some time? Who hasn't suffered a rope burn?  Who hasn't been cut by their own knife or by a sharp edge or shredded wire shroud? My big concerns are being burned by hot liquids, getting my hand caught in a sheet or the winch, or being thrown across the cabin like my husband was breaking four ribs. A broken back could be far worse.

Yet I am encouraged that the severe accidents and injuries are less common than I thought they might be. I always walk off the boat with bruises. That's a given. Sealegs can be tricked. But at least I hope never to fall overboard or be killed by a wildly swinging boom. 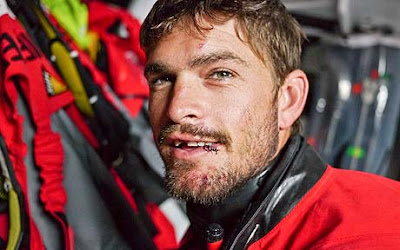 Mike Pammenter, the Camper bowman, was swept off his feet by a wall of water during a sail change in Leg 1 of the VOR. He was smashed against the shrouds knocking out a tooth and gashing his lip, which needed emergency suturing by another member of the crew Tony Rae, who had trained especially to deal with these types of injuries.
contusions lacerations sailing injuries