We are currently planning a passage to a place even more remote than ours, the Faroe Islands. The Faroes are half way between Denmark and Iceland in a desolate stretch of water. Like Scotland to their south, they have little tide range but strong tidal currents. Navigation can be tricky, but we are figuring it out. Self-sufficiency is paramount. One of the joys of having a sailboat is being able to get to remote places that are not so easy to get to otherwise.

What's not so easy is that it's a bit difficult to find information about cruising there. They are not exactly on the beaten path, although the Cruising Association has published a cruising guide which we have now ordered.

The Faroes are geologically young islands, with jagged peaks and villages plonked in seaside calderas. They are politically affiliated with Denmark.  There are about 300,000 inhabitants in these islands. DNA analysis shows that they are descended mainly from Viking men and Scottish women. Their isolation has resulted in a unique cluster of health conditions. Like in Ireland, there is evidence of early Christian settlements, so we are embarking on a Viking sea route voyage. I'm excited.

We need charts, tides, currents, currency, translator, guide book. I've ordered a courtesy flag. It takes a good deal of planning. First, we will sail to the Outer Hebrides and spend a few days exploring there. The distance from Stornoway to Torshavn is only about 200 miles so a 2 day passage would do it. That should be a reasonable weather window to find. Of course it all depends on if the weather cooperates. If it doesn't, then we might just head south instead. 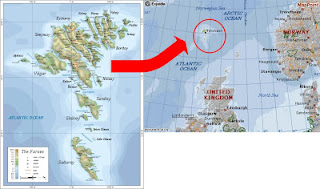 Water and fuel in Torshavn. ATM on LHS opposite garage in town.

Some useful resources for planning a visit to the Faroe Islands.

Here is a page with the currents – downloadable pdf files
www.mid.fo/strymkort_utprint.htm