We had a leisurely start and left Ventry motoring in light air. Soon the wind picked up a bit out of the SE and we hoisted sails. We sailed out through Blasket Sound following another sailboat out.

The sail inside Great Blasket Island was beautiful. The anchorage there looked a bit more secure than the one we had just visited but exposed nevertheless. There was a sailboat and a power boat anchored there, presumably overnight. There were people roaming around the deserted village, presumably brought there by the tour boat in the anchorage. There is now a visitor's centre and cafe on the island during tourist season. It appears a few of the cottages have been restored.

Another time we'll come back to explore the Blaskets more. There were lots of islets strewn in the passage between Great Blasket and the mainland so careful navigation is required.

The coast of Kerry here is very dramatic. Rocks everywhere, cliff faces full of birds, some soaring high and low. Loads of gannets were falling out of the sky and skimming the waves. The Three Sisters cliffs leading into Smerwick are stunning. They were the first geologic feature that Charles Lindbergh first sighted and was able to identify on his epic solo trans-Atlantic flight. 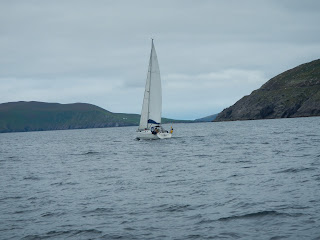 Smerwick is open to the north but very protected from the west, south and east. There were high hills all around the harbour, including Mount Brandon and another with a steep face cut out by the forces of nature. A very long white sand beach stretches from pier to pier and village to village. The surf makes it rather precarious to land a dinghy on the beach.

We have been thinking that the beaches in Ireland are so stunning that if our weather were better, everyone would want to live here.  It would become like the Riviera, crowded with people and we wouldn't be able to afford to live here. Climate change may indeed precipitate that change as people stay away from the places where the heat turns up to over 40 degrees C in the summer months routinely. What a thought!

Smerwick had a substantial Christian settlement in the 6th and 7th centuries and there are many archaeologically important sites nearby, including the Gallarus Oratory and Dún an Óir, a promontory fort that is being washed away. Smerwick later became a Viking settlement and it's name is derived from the Norse meaning butter harbour. Although still appearing as Smerwick on charts, it's official name is the Irish ‘Ard na Caithne’.  Bounded by the villages of Baile an Fheirtéaraigh, Baile na nGall the area is known as the Fíor-Ghaeltacht, or true Gaeltacht, where the Irish language is spoken by everyone.

We had a nice gourmet lunch of lemon and herb chicken on rye bread with tomato and garlic mayo. Yum! Time to relax. Tomorrow will be a long day. The forecast is for SE winds 15-20 knots, so a long sail to the Aran Islands (62 mi) or Roundstone (75 mi) is on order. As we are heading NW, those are ideal conditions for us.

We'd love to spend more time but a gale is forecast for the day we were scheduled to arrive back home, so we had to cut our trip short by a day. Such is the planning for a west coast passage. All plans go out the window when the weather turns.