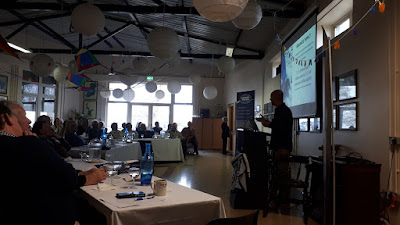 I attended a cruising conference organised by Irish Sailing this past weekend. It turned out to be excellent. The lineup of speakers included:

Coastguard explaining the ins and outs of a helicopter lift

Norman Kean on the future of diesel for leisure craft

Damian Foxall on sustainability and the changes Volvo Ocean Race made

I am delighted to say that I learned quite a lot. I learned the most from well-known sailor Damian Foxall who was the sustainability officer for the VOR Team Vestas 11th Hour Racing. They undertook an analysis and tracking program, along with education and implementation of a strategic plan for reducing environmentally unfriendly practices. The final report of the initiative is quite enlightening especially for circumnavigators.  By refusing, reducing, reusing, recycling and offsetting, we can significantly improve the footprint we leave behind. It opened my mind to some new ideas. Time to put them into practice.

Tied in with this topic, Niall Hatch's talk on coastal bird watching and identification was fascinating. He covered a lot of mileage in a short time, including the effects of plastic pollution of the oceans on birds. We're doing well in some areas of conservation, poorly in others, and climate change is causing some species to move away and others to move in. But plastics are the scourge to tackle. So here we go.
11th Hour Racing Damian Foxall Irish Sailing. plastics sailing sustainability Vestas Volvo Ocean Race