Delivery of Aleria from Clew Bay to Killybegs - Day 1 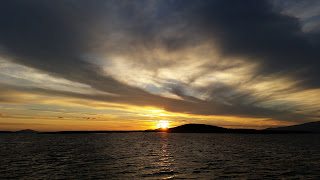 We had a fine weather window that coincided with the astronomically high spring tide. If we left with the tide on Tuesday afternoon, we could sail to the Inishkeas or Black Sod Bay the next morning, spend the night there, then continue on to Killybegs Thursday and haul out on Friday. Unusually, there was a high centred over Scandinavia just above us that was extending all the way down to us. We were to have light southeasterlies and clear skies after strong easterly winds on Tuesday. Meanwhile, a succession of lows plunged across below to Spain and a slow-moving hurricane Matthew was plaguing the US East Coast.


We got aboard around lunchtime on Tuesday and soon got underway. We made it over the oyster bed. But all of our usual anchorages in Clare Island, Achilbeg, and Inishgowla were untenable in the 20 knot plus easterly wind we were experiencing. So we made for Derrinish Island thinking we'd find shelter in its lee, but it was too exposed. Interestingly, the west end of Inishgowla proved quite sheltered and with good holding in muddy sand. We dropped anchor in 28 feet of water near high tide, staying clear of the bar that comes out from Inishoo. Beyond the shelf is a steep drop off that could be problematic if the anchor dragged.  The Ultra should hold well here (and it did).

We soon settled in with books in the brilliant sunshine on deck. Several fishing boats were out and about. Towards the evening, the wind died despite the forecast being for increasing wind through the night. The sunset was beautiful as the sky lit up.  But we needed blankets on deck against the cold easterly flow. We'd be up early to make the 50 mile trip to the Inishkeas so off to bed we went soon after dinner, snuggling against the chill air with the big moon lighting up the night sky overhead.

Dense fog first thing in the morning lifted by 9 AM. We had a very light wind to start and Alex even brought the spinnaker on deck thinking that a SE light wind would necessitate lots of canvas. Naturally, as soon as we were set to raise sails, the wind picked up again. We soared out of Clew Bay and around Achill Head, which had a rather flat sea for a change. Suddenly, Aleria stopped dead and the main backed. But we had anticipated that we'd hit a big wind shadow as we came around to the NW of the massive cliffs. We started the engine and motored out of the shadow. It was the first time we actually passed between Achill Head and Carrickakin.

Meanwhile, we had tried to hail Northabout, the boat Jarlath Cunnane had built, on its way back from a stunning feat of a 2nd circumnavigation via the NW and NE Passages, this time in one season, under command of its new owner. It's never been possible before. Jarlath had called to tell us they were heading in and 25 miles off the coast. He was watching their AIS-reported position on their website.

What followed was a hilarious call from the Coast Guard. They'd been following Northabout and wanted to welcome them home and find out where they were heading. We told the coastie that they were heading for Black Sod to quench their thirst with a few pints at the pub. Later, he called us back and confirmed their position and destination, which we relayed to Jarlath. Jarlath and Michael Brogan then drove to Black Sod to meet up with Northabout and sailed with them into Westport to a big welcome from RTE and Mayo News, and the folks at the Helm. Needless to say, they were the worse for wear the next day or two or three.

At the Inishkeas we realized it would be too exposed in a SE-ly but it didn't seem to be very rough. Interestingly, we did not see any evidence of barnacle geese. Had they delayed their arrival? Nevertheless, instead of taking a chance there or going all the way into Black Sod Bay, we went on to Portnafrankagh. We'd never been there before. It's on the North side of Anagh Head just south of Eagle Island.  It's a favourite passage anchorage although very exposed in a westerly with breakers across the entrance in a big sea. In a SE'ly it would be perfect.

The approach to Portnafrankagh from the south was a little more difficult than it would have been from the north, requiring careful navigation to avoid the rocky promontories. We managed to avoid all submerged rocks and anchored in the NE corner in about 28 feet of water. The SE corner had many moorings most with currachs or little fishing boats on them. The pier in that corner was busy all through the night. Otherwise, the inlet has no facilities.

There is a small shop and a pub at the village of Corclogh two miles inland along the Mullet peninsula. Belmullet is four miles away.  We wondered what the huge ruin on the northern periphery was and what the strange construction on the southern periphery was that had what looked like a tourism sign next to it, but we didn't go ashore.