Emirates Team New Zealand taking the America's Cup down under 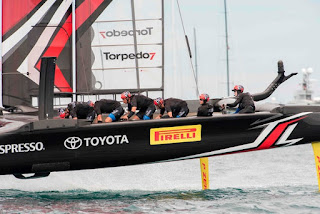 Foils, wings, and pedal power led the Kiwis to a massive 8-1 victory over the billionaires of Oracle Team USA. Burling, at 26 the youngest helmsman in the AC, made the transition from junior AC in 2013. So the oldest trophy in sport goes to the youngest skipper. Once again, innovation trumped unlimited financing. But was this sailing?  One might argue not. And how was it a contest of nations when in the last race there was no true American aboard the Oracle Team US entry?

The Italians have already announced their bid and NZ accepted their challenge for the next race. And they are questioning the boat design for the next series already. Back to monohulls?  Maybe not, but they will surely need boats that can handle a bit more wind down under. And what about a nationality clause?  With all the Aussies and Kiwis serving on other teams, Emirates Team NZ could certainly benefit from such a change and have the opportunity to rewrite the rules, which I believe the Italians would support.

We shall soon see. Overall, the entire event was a great success. In the calm Bermudan waters, you had the beauty of the J Class fleet, the vigor of the youth AC challenge, and the spectacle of foiling multihulls. Sailing is once again capturing the imagination of the world. Long may it continue. 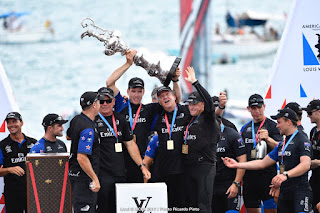