How will Climate Change affect sailing?

- October 15, 2017
As sailors, we are acutely attuned to wind, waves, and weather patterns. Our lives depend on it. As long-term sailors, we've been noticing the acceleration of changes in those patterns. I wrote about it first many years ago when sailing on Long Island Sound. I wrote about it again in 2011 after several crossings of the Atlantic.

I am clicking away today after three killer hurricanes devastated the northern Caribbean and Southern US states, then wildfires burned their way through wine country. Never do I remember such a scale of destruction as we've seen this year. Just look at the size of Hurricane Harvey as seen from the ISS.

Closer to us here in Ireland, a massive jellyfish assault killed thousands of salmon in farms along the west coast. Jellyfish have been thriving in the changing ocean waters. And now a Category 3 Hurricane Ophelia is heading directly for Ireland. Ireland? And it didn't go west first.

Cruising World interviewed sailor and climate change guru Dr. Philip Rasch. He outlined the change in global patterns of air and water movement. Perhaps most worrisome is the prediction that waves are getting larger in the mid-latitudes where most sailors cross oceans. The Greenland ice melt is already affecting storm tracks. "Storm track regions are projected to move closer to the poles. As they move closer to the poles in these wavy, meandering currents of air, the amplitude of the storms is also projected to change," he says.

Meanwhile, just last week, scientists explained global weather patterns after being inspired by bagel-shaped quantum matter. I think I sort of understood what they were talking about, but I'm not really sure. The team applied condensed-matter theory to two types of waves, known as Kelvin and Yanai waves. The waves are created by the interplay between two physical processes. First, gravity competes with buoyancy, causing colder air or water to sink and warmer air or water to rise, making the blobs of air or seawater bob up and down. Second, Earth’s rotation to the east creates the Coriolis effect, which makes fluids moving over Earth’s surface flow in opposite directions depending on the hemisphere. The resultant waves can propagate through the seas and air near Earth’s equator. Both are undulations with wavelengths hundreds or thousands of kilometers long that carry energy eastward along the equator, contributing to El Niño, tropical storm systems, and other weather patterns.

So if I understand it, the gravitational and buoyant forces create the up and down amplitude and the Coriolis effect gives the waves directional motion, hence the massive undulation. Is this why the waves on the ocean are expected to get bigger in the mid-latitudes? Is the buoyancy of the seawater changing?

It seems likely to me that now that these forces have been described, scientists will be able to track the changes and predict their oscillations with greater accuracy. Of course, it's also possible that things will change more quickly than we can predict. So what do we a sailors do?  Keep on sailing, secure our boats when the bad weather comes if we can, and go back out when it passes. And if we get caught out in bad weather, practice good seamanship, heave to, and pray.

Or we can sit in our homes and watch these monster storms slowly work their way toward us in technicolor as we bite our nails and pop antacids. 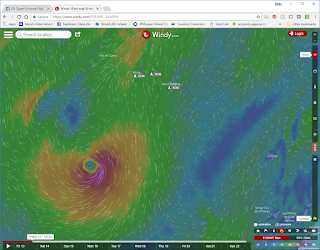