We sailed inside the Illa Ons and into the Ria de Pontevedra and our next destination, Combarro. We passed Sanxenxo which appeared to be a modern city, and continued on to the head of the Ria. Our charts showed the area as quite shallow, but we were informed that the depths where the new marina is now and outside the massive outer pontoon are 3 meters, and indeed that was the case. We followed the deeper channel in along the Illa Tambo where several boats were anchored.


As it turned out, the marina had been expecting us and had a spot for us on the outer pontoon which turned out to be quite easy. In the end, we ended up with another yacht rafted up to us which was fine. We were invited for drinks aboard and had a lovely time with the Irish crew. The guide book didn't have much about Combarro, but stated that it should not be missed. Naturally, we were curious and headed into town.

Much like in other towns, there was a large central square and waterfront promenade. But what we soon discovered was that a) Combarro has more horreios (granaries) than any other place in Galicia and b) it has a remarkable street carved into the granite. That street is lined with bars in caves, restaurants perched over the water, and tourist shops selling Celtic souvenirs. Granted it was touristy, but it was also very interesting. The food was good and the farther one ventured, the better it got. We loved this little gem of a fishing port. Tiny streets carved out of rock meandered up the hills and around the town.

The fish was extraordinary, caught fresh locally every day. Pulpo, or octopus, was the local favourite and served at each restaurant. The house albarino wines were delicious, and we were not wanting here.

We had the opportunity to take a boat ride out to the Naval College across the Ria in Marin, which was interesting. Normally one doesn't have a chance to visit this historical place, but being there with the ICC got us in. Some people took a ferry trip to Pontevedra which was a long trip because the river had silted in and required careful navigation. We chose to leave Pontevedra for another time.

We loved our stop in Combarro and spent several days just wandering the narrow stone streets and being tourists along with the rest.

Later in our trip we had the chance to stop in San Vicente do Mar, a delightful place where an annual Classic Yachts Regatta takes place, just at the northwestern periphery of the Ria. As Alex was crewing on our friend's yacht in the race, we were given a spot med moored to a pontoon in the outer harbour. The staff there were very kind and nudged Aleria into place. They served as launch drivers on call at all hours to take us ashore. 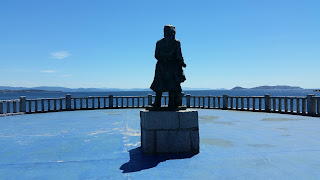