NOAA has posted a draft plan on the future of charting

NOAA has undertaken a comprehensive plan to evolve their chart products. The following statements are from NOAA announcements recently released:

"The NOAA Office of Coast Survey has released a draft National Charting Plan. The plan describes the current set of NOAA nautical chart products and their distribution, as well as some of the steps Coast Survey is taking to improve NOAA charts, including changes to chart formats, scales, data compilation, and symbology. The purpose of the plan is to solicit feedback from nautical chart users regarding proposed changes to NOAA's paper and electronic chart products. Coast Survey invites written comments on this plan that is available from https://nauticalcharts.noaa.gov/​staff/​news/​2017/​nationalchartingplan.html."


"NOAA invites public comment on the recently released National Charting Plan. Comments are due by midnight, June 1, 2017. The National Charting Plan is a strategy to improve NOAA nautical chart coverage, products, and distribution. It describes the evolving state of marine navigation and nautical chart production, and outlines actions that will provide the customer with a suite of products that are more useful, up-to-date, and safer to navigate with. It is not a plan for the maintenance of individual charts, but a strategy to improve all charts."

Ships on international voyages must comply with the 1974 International Convention for Safety of Life at Sea (SOLAS). In 2012, International Maritime Organization (IMO) adopted regulations that will make the use of Electronic Chart Display and Information Systems (ECDIS) mandatory on certain SOLAS class vessels by July 2018. Many already do. That means that all large SOLAS class ships will soon stop using paper charts as their primary means of navigation and start using an ECDIS to display electronic navigational charts.

To create the most accurate and up-to-date Electronic Navigational Charts (ENCs), NOAA is proposing several major changes to how navigational information is generated, stored and reported. Essentially, they are proposing to eliminate raster charts and refine ENCs. Coast Survey currently produces three products that meet the carriage requirements specified by the IMO and the U.S. Coast Guard. These are the nine-volume set of the U.S. Coast Pilot® sailing directions, NOAA ENC® digital charts, and NOAA paper nautical charts (when printed by a NOAA-certified chart agent).

Stuart Scadron-Wattles posted some insights into the planning process on the Three Sheets Northwest blog. Of particular interest are some of the new tools that are already available such as the Northwest Association of Networked Ocean Observational Stations (NANOOS) web interface which provides customizable data that allows users to plot a course along the Pacific Northwest coast taking factors such as tides, currents and weather into account at specific points in time. It illustrates a direction that navigation using electronic coastal charting may take in the future. 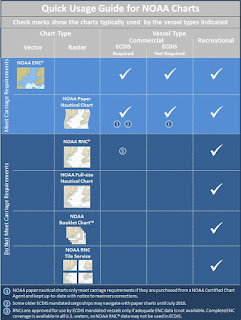 One of the changes that is definitely going to happen is that future charts maintained by NOAA will show depths in meters rather than feet or fathoms.  Most raster charts show depths in feet or fathoms, whereas the convention adopted for Electronic Nautical Charts or ENCs was depths, depth curves and other features noting depths converted into decimal metric values. Now that ENCs are deemed acceptable for commercial navigation, standardization with international conventions for use in navigation equipment makes much sense.

As the issue identified by recreational boaters that NOAA could most improve is depth information, this may not go down terribly well in the non-commercial sector. NOAA states that there are 15 million recreational boaters in the US. It didn't work when they tried to convert paper charts in the 1990s. But today, mariners will still be able to convert the information to feet and fathoms within their navigation systems so NOAA is confident that it will work this time.

One change we welcome is the re-scheming of ENC cells. When paper charts were converted to ENCs, the resulting areas covered in each cell were irregularly shaped, often at different scales, maintained in individual databases, and adjacent cells sometimes did not match up. ENCs do not need to follow raster charts so NOAA will create a new gridded system with standardized scales and cell sizes. Cell boundaries will follow latitude and longitude lines. Moreover, the data will be held in one seamless database called the Nautical Information System (NIS).  NOAA also proposes that the hydrographic data generated by the US Army Corps of Engineers for ports will be integrated as will the USCG Aids to Navigation and other items listed in the Notice to Mariners.

Apparently, according to the blog posting on Three Sheets Northwest, Jeffrey Siegel, owner of Active Captain, dropped a bombshell at the launch meeting for the plan in mid-April. He suggested that NOAA get out of the recreational cartography business altogether. Interestingly, on May 11, Garmin announced it had acquired Active Captain. Jeff and his wife will become employees of Garmin, a commercial venture in electronic cartography. Curiously, they do not state in their press release what will happen to the crowd-sourced data that the users of Active Captain painstakingly input into the system which Jeff promised would be free to use by the boating public in perpetuity.  NOAA clearly states that nautical chart data will continue to be available free of charge - after all, the taxpayer has already paid for it.

The conclusion of the plan states that this is the end of raster nautical charts and the sunset of paper charts. Only small scale overview charts will continue to be produced. I certainly do not agree with this and have written in the past about the dangers of relying on electronic charts alone.

Anyway, the notice in the Federal Register can be found online and contains links to the full plan as a pdf and to the comment form with instructions. You can submit your comments via a word document, a pdf or a txt file directly to the online Nautical Discrepancy Reporting system, labeling the report under Other Products as "NCP". The final date for submitting comments is June 1, so don't delay. Let them know what you think.