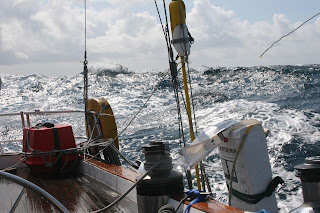 My husband and I, like most couples, sail short-handed. Setting off on an ocean crossing or even a briefer offshore voyage takes a good deal of advance preparation, especially the first time.

There's a progression of experience we've noted. The first voyage is filled with fear, primarily fear of the unknown. You make lists, then lists of lists, then prepare for every eventuality. With each successive voyage, unless they are significantly different, the fear is replaced with other emotions, including excitement, anticipation, anxiety and determination. But a healthy dose of fear and respect for mother nature is always good to have. The one thing one needs to fight wholeheartedly is complacency. Complacency can lead to mistakes, and mistakes can be catastrophic out there.

There are several things that I find myself going through each time we venture offshore. I create lists to make it easier to sleep at night. Lists of provisions, gear, procedures, and so on. If I write it down well in advance I am less likely to lie awake trying to remember what I should be doing. But I am not as pedantic as I used to be. I provision but don't make lists of meals with all ingredients for the entire voyage. How do I know what I'll feel like eating on day 5? I'm much more relaxed about it, but that's because I usually have far more provisions aboard than we could possibly use in the time frame intended. 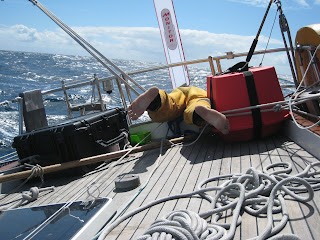 Then, I settle into a “What if…” mindset before we even set foot aboard. It’s very much along the lines of astronaut Chris Hadfield’s line of thinking about "What can kill me next?" (Loved his book and admire him very much.) If something breaks out there, you have three choices: fix it, replace it, or do without it. That helps prepare for the eventualities that can be managed in advance, like carrying spares for all the things you don’t want to be without. If you think through all the things that can go wrong and consider and practice what you might do when they do, you are more likely to manage effectively. After all, we are responsible for our entire universe and the lives of those in it when we sail off.

"If something breaks out there, you have three choices: fix it, replace it, or do without it."

Once aboard, we follow the cardinal rule: Stay on the boat. Always tethered. Nothing else matters as much. And when something goes wrong, we refer to the Hitchhikers Guide to the Galaxy rule: Don’t panic! We’ve learned under extreme circumstances that we manage that last one particularly well. The more we do it, the less we fear, because it’s primarily fear of the unknown that we’re dealing with, and the less we are prone to panic. Yet, fear of falling overboard should never go away. 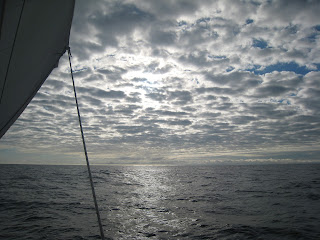 Coming up is our relaunch and delivery of Aleria from Donegal home to Mayo. It's only two days away so picking a weather window is fairly easy. The next one, crossing the Bay of Biscay from Ireland to Spain will take 4-5 days. That should be okay, but it's a treacherous and unpredictable body of water. So I start my mental preparations now in the knowledge that in a couple of months time, I'll be sailing offshore. It's awhile since we've sailed offshore. I'll have to stoke the memories before then.

For a more detailed discussion of "performance sailing" preparation, try this article by
Roger Friesen.