Yesterday, we got up long before dawn to attend the Irish Sailing Cruising Conference. Held at the National Yacht Club in Dun Laoghaire, it was a sellout. Driving there was a chore for Alex, as storm Dennis had arrived that morning with lashing rain and high winds. But as we got closer to Dublin, the weather cleared a bit. It rained most of the day, so it was a good one to spend indoors.


After a warm welcome from Harry Hermon, CEO of IS, and Gail MacAllister, organiser of the conference, the packed agenda kept the pace up the entire day. Harry opened by acknowledging that there are far more cruisers than racers in the world of sailing and that cruisers have been underrepresented and underserved by the sailing world representational bodies. He asked for input on how IS can support cruisers through new initiatives. We will definitely provide input.

It was an informative and stimulating day, with the opportunity to network with some fine Irish sailors. Lunch at the Club was delightful and delicious, and a good informal setting in which to meet new cruisers. Interestingly for us, we happened to sit with Aidan Coffey and his wife as well as their friend John and his wife.  John is currently reading Happy Hooking which his wife bought for him, and Aidan bought Cruising the WAW at the first IS Cruising Conference where I spoke.

We stayed at the Haddington House Hotel, which is a delightful boutique hotel just across the road from the NYC in Dun Laoghaire. The room was tastefully fitted out and came with a Nespresso machine. The bathroom was lovely in B&W with rain shower. Its Oliveto restaurant serves up topnotch Italian fare and was quite popular on a wintry Saturday night. It has off-street parking in a strange arrangement with a property next door that worked just fine and was much appreciated. The breakfast in the morning was very good and included with the room. If the forecast hadn't been abysmal for the afternoon, we might have hung around Dublin for the day. Instead, we drove home. The cats were happy with our decision. 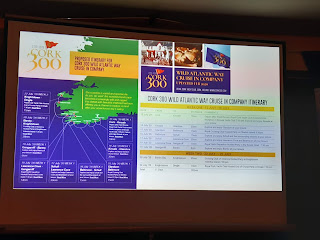