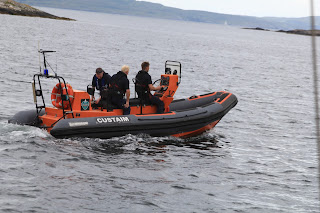 Today, for the first time since we sailed to Ireland in 2008, a Customs boat came to visit. Three officers were on board a rib and two let us know they were coming aboard. We welcomed them and offered them some tuna salad as we were just having lunch. They declined.

They apologized for interrupting our lunch and explained they had a few questions to ask. They started with our MMSI, which shows as American on an Irish flagged vessel. I explained that it was a legacy radio unit bought in America and that we had a new Irish MMSI number but had been unable to programme it into the old radio. That was accepted. They also asked about the flag, the ICC ensign, with which they were not familiar.

Then they asked about whether the boat was registered and to see the certificate. It is registered in Ireland.  He asked if VAT had been paid. Alex explained that it was imported together with all our possessions in 2008 and was therefore exempt. He asked if we had any documentation. I produced a letter from the Revenue agent to that effect. The officer was impressed. He said it was a very valuable piece of paper. He asked Alex about growing up in Ireland and Alex explained he had grown up in Clew Bay gone to school in Germany then had been living and working in America for twenty years. The officer was very skilled at questioning and had a well-trained manner backed by a good disposition.

He then took down our names and passport numbers while we chatted. They stayed for a while asking us about crossing oceans and living in Mayo. When the question of Trump came up, we told them about the video in which Inishturk residents offer residence to refugees from America if Trump wins. They hadn’t seen it and were interested to learn of it.  It was all very pleasant.  Had we not had all our papers in order, it might have gone differently.  The officer told us he’d appeared in yachting magazines as having intercepted yachties and he didn’t like that very much.

The best part was that they also explained that we were missing out on a really important benefit of sailing overseas. We can apply to Customs for a bond that allows us to buy duty free as we exit. The only problem is we have to use it all while at sea or it becomes sealed and bonded while in the EU. Had we had duty free goods aboard when leaving for Spain but returned to Ireland, they would have been sealed on our return. Glad we didn’t after all.

Of course with Brexit around the corner, sailing to England, Scotland and Wales will become very interesting indeed; as when they are outside the EU, we’ll be able to sail there with duty free bonded goods aboard without a worry in the world. Oh yes, in a couple years’ time, GB here we come. Another good reason for Brexit.