It’s been cool and breezy in the teen degrees centigrade until yesterday morning. We noticed the difference first thing on the way to the showers. We didn’t need a fleece. We had decided to visit Belem, a cultural suburb of Lisbon, and it was a Monday (fare €5 round trip just like to Lisboa). By the time we reached the train station in Cascais, it was 29C. By the time we reached Belem, the outside temperature reported by the train display was 36C. It was going to be a scorcher. Out of nowhere. No way to adjust. Just had to deal with it.

We needed to visit the chandlery first. It was an easy walk from the Belem train station. One gets off the train facing the Museum of Coaches where you can cross the busy highway. Turn right and walk to the colourful children’s playstation and turn left there on the first street that goes up the hill. Turn right at the first cross street and walk about two blocks; it’s a small shop on the right just past the house with the vine growing into the fence. It’s a very nice small chandlery and has a good supply of gear, a sample of which may be located on the floor, the rest in the back. He had all but one item on Alex’s list and a couple of things I wanted as well. Success.

The only things to do on a day this hot was to avoid moving, get into water, or go into an air conditioned space. We had missed out on Belem’s museums last time so we opted in this time. 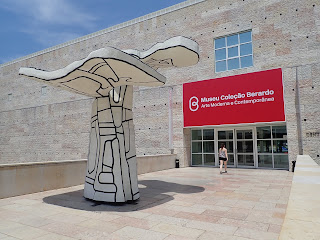 First was the Museum of modern and contemporary art. It is a new complex and looks like a vast Mayan pyramid from the outside. It was hard to find an entrance and we stumbled into a small gallery displaying a most extraordinary work by Dali. Apparently, Dali had been commissioned to create a series of drawings to illustrate Dante's Inferno which would be issued as a book on the 400th anniversary of his death. But the sponsor pulled out and Dali was left with almost 100 original colour drawings depicting Dante's descent into the inferno, crawl into purgatory and ascent into the heavens. Several years later, a Portuguese sponsor came forward to produce the book. They issued 100 copies, each with 100 illustrated plates signed individually by Dali. Some years back, the book was released again in several countries in limited editions and one of the originals was taken apart and sold for about €3500 a plate, now untouchable. Each of about 30+ frames per episode was accompanied by several lines of text interpreted from the original work. Dali was the perfect mind to interpret Dante. It was an extraordinary collection and another fascinating chance encounter with Dali, which we have now experienced in several countries. Somehow, we just happen to stumble upon Dali collections.

Inside the museum, the space is enormous and the art sparingly displayed across three floors. The main collection is well curated and begins with Miro and the evolution of cubism.

Rooms upon rooms of artists experimenting with form, texture and colour, trying to dimentionalise a flat canvas or deconstruct a visual image. I must say, neither one of us gets most modern art and this was a very large dose – large enough to last about a decade perhaps before the next exposure. How does one react to a flat black painting in a black matt and black frame?  The artist didn’t even title it. I did not see any Picasso in the collection which was curious. There were several Warhols I hadn’t seen before, and a few of the more contemporary works I quite enjoyed as they strayed from the conception of ‘painting’ on a canvas, but there were only one or two works in the entire museum that I thought I could actually live with. Oh well. That’s me - and Alex, too. Our house is full of stuff we like that wouldn’t belong in a museum.

So although it was climate controlled and comfortable, we were exhausted and hungry. By the time we found a place to eat, we were dying of thirst as well. But we found a nice spot on the river overlooking a castle. Cold beer, cold Seven Up, quiche and a sandwich and we were ready for the next go. We had seen a maritime museum across from the modern art museum.

The Museu de Marinha on the Praca do Imperio in Belem was a sight to behold. It sits on the western end of the Jeronimos Monastery, the doors of which were closed, and very close to the Tagus River where the explorers’ ships departed for uncharted territory. It’s one of the main features of the Belem skyline. Possibly the best maritime museum we’ve ever visited, it is vast and holds the biggest collection of model ships we have ever seen. And with Portugal’s long history of maritime prowess, there was an enormous amount of stuff to see and learn. From the earliest contributions to navigation, to global voyaging and opening up of the trade routes, to traditional and modern fishing, flying boats and contemporary warfare and coastal management, the Portuguese made a huge impact. The building is at the heart of Belem and the museum was established in 1863 by King Luis. It owns more than 17,000 items, 2,500 of which have been selected for permanent display.


To our complete pleasure, we happened upon a display of ancient anchors near the WC, a hallway we would not have ventured into had we not had to 'go'. They had ancient Roman anchors from the 1st century and a reproduction in beautiful form. They also had an interesting depiction of the history of anchor starting with rock on a rope and ending with the CQR and Danforth. Hahaha. It was fun to see and added a new dimension of our historical account of anchor design.

We were completed exhausted after that and walked to the first café we found to rest and have a refreshing beer before returning home. We got on a train only to see about half way that the sign said ‘Fim de transit – terminus.’ We asked the lady next to us and she said we should get off and take the next train on the track beside it which would take us to Cascais. Several tourists came to us to confirm. When we got off the train, we couldn’t believe it. The air temperature was at least 10 degrees cooler in Cascais than in Lisbon, but we heard later that it had been hot, here too, earlier in the day.  At that moment, we felt chilled as the difference felt quite extreme. Amazing.

All in all, we’d had a good day. Belem is now checked off the list. Our memories from ten years ago came flooding back and they were good. Tomorrow, more work to be done, varnishing and installing bits and bobs on Aleria.