Settling in in Cascais marina 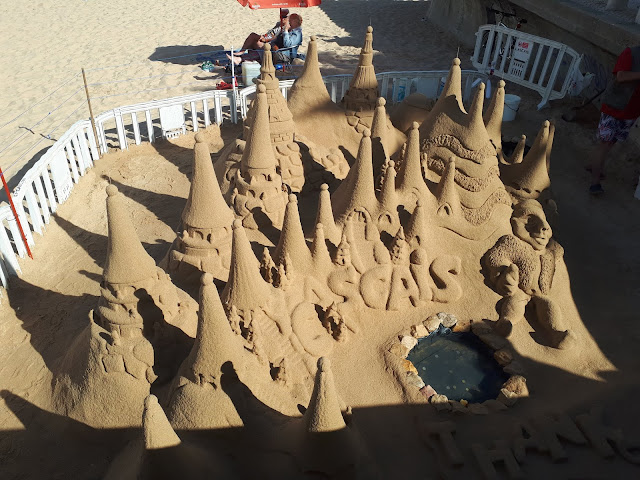 Today is Sunday and I can't believe it's been a week already since we arrived in Cascais. Where to begin? There has been no internet in the marina so writing blog posts has been a challenge. I've also been too busy to actually sit down and write.

The marina is set up for super yachting and is frightfully expensive. But if you join the Portuguese yachting association, you can get a 25% discount -- that is if you can reach them, send them the €25 fee and get a card in return.

We had arrived in heavy mist at about 9 am. Surprisingly, the marina responded to our hail and told us to go to the reception pontoon. There were already boats tied up but we learned they were at the fueling dock. We observed what I thought were improvised channel markers that looked like mooring balls painted red and made it in fine. Turns out they were indeed markers to denote shoaling. We checked in and had to remain at the pontoon until the marinieros arrived - 11 am on a Sunday. So I took a shower but learned that our key cards are limited to the area of the marina in which we reside and that was to be on the other side. So I couldn't use the loo in the main building nor walk down any of the other docks. But they were very nice and opened the door for me when I needed it.

As soon as we tied up in our assigned slip, we removed most of the sails and Alex started dismantling the mast wiring connections in anticipation of the rigger's prompt arrival in the morning, at least we hoped he would arrive. It was too windy to remove the yankee so we left that for the morning. Instead, we went into town to check out the fiesta going on. Very touristy waterfront. Lots of restaurants jam packed. The waterfront was covered with kiddie games and stuff. Zip lining, paddle boarding, etc.

We were up early enough Monday and having breakfast when there was an 'Ola' on the dock. Jorge and his assistant 'also Jorge' had arrived at 10 am on Monday morning. They got right to work disconnecting everything that could be done ahead of time. They had the yankee down and flaked in about 5 minutes (it would have taken us an hour) and did about another 1.5 hours before letting us know that we were scheduled to pull the masts on Wednesday morning.

I did the laundry, as we had another week's worth already. The machines here in Cascais marina are in the main building and cost €3 each for wash and dry.  Tokens are purchased at the office. There are only two machines of each and there were three people vying for them. Laundry strategy must be enacted here. It's a long walk from Aleria.

Tuesday, yet more chores, with Alex dismantling stuff everywhere and I trying to get things to work. I was feeling awful at this stage and could barely function. Heavy congestion, massive coughing and sneezing.  It was hard to stay awake and focused.

That evening I got a call from Ocean Cruising Club Committee member Eoin Robson, who is also OCC PO for Stavanger, Norway. Eoin is from Waterford but lives in Norway working for the oil industry. He found himself in Cascais by chance and asked if he could stop by. We told him to come on over. Alex had just baked bread and we had some nice cheese so I made little snacks. We caught up and learned that he was to meet up with a boat that was held up by headwinds and tidal currents along the coast and was diverted to Cascais at the last minute. He looked on FB and saw we were here and decided to look us up. Such a small world. Gotta love the OCC connections.

The next morning, Eoin learned that his boat was further delayed. Eoin's boat was now scheduled to come in at 5 pm so they decided to spend the night and continue on in the morning.

Meanwhile, we were to meet up with Jorge and Jorge, our riggers at 8:30 promptly as we were scheduled for the crane to lift our masts at 10:00 am. At 9 o'clock, we started wondering where Jorge could be. By 9:30 we were worried. Alex went up so see what was going on. He saw Jorge II who was trying to find Jorge. They finally found him trying to organise the space for the masts in the work area.

By 10:30 we were on our way into the dock, with the mariniero from the laundry yesterday keeping Aleria steady and pushing us in to where the crane was to meet us. It arrived just as we did. Jorge climbed the mast and secured the harness from the crane. They disconnected the standing rigging and there was our main mast, flying through the air. Precision work to get it onto its cradle.

Eoin stowed his gear on our boat and supervised the work. The mizzen was a piece of cake except that it tipped and almost fell on me and Eoin standing by watching.

When it was time to go to lunch, we invited Eoin to join us. He said, "but it's not even 1200". We both looked at each other realising we were on the wrong time. Our phones had not switched over to Portugal. So the riggers weren't late after all. We were still on Galician time! We had a nice lunch in a typical local spot off the beaten track where we each had an amazing meal for under €10.

Meanwhile, Alex and I organized dinner with Eoin's yacht crew, us and a lone American sailor Scott Allen from our pontoon. Alex got recommendations from Jorge who turned out to be somewhat of a gourmand. He knew every restaurant in the area. We chose one not far that is the 'favourite of the locals' for traditional Portuguese dishes. And it was fabulous.

Angus Cater, owner of the yacht Eoin was to sail on, was a former OCC member and Antarctic explorer. His crew was his son Thomas and friend Helen, all terribly nice.  We had a lovely time. Angus regaled us with stories of his exploits in the old days and his long yet often challenging friendship with Richard Anderton, a classmate and former OCC Secretary. In the morning they cast off for Leixoes and we carried on with our chores. By now my cold had become fulminant and I could hardly breathe or stop coughing. Not fun. Need to rest and no time to do it. Where does the time go? 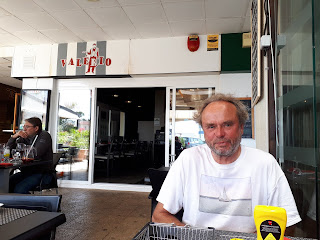 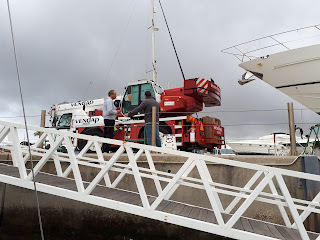 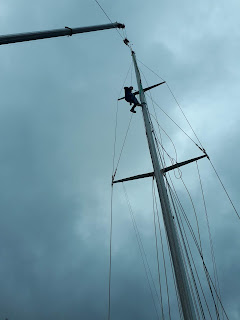 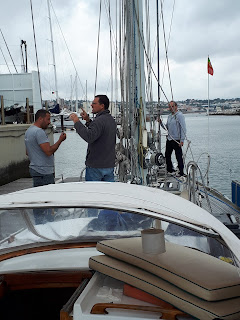 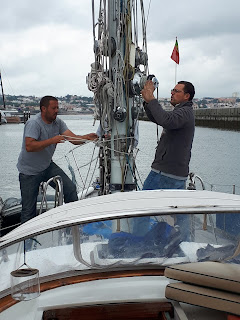 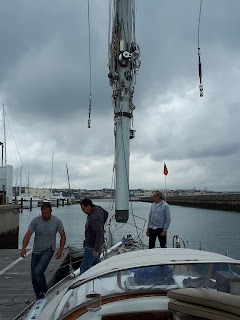 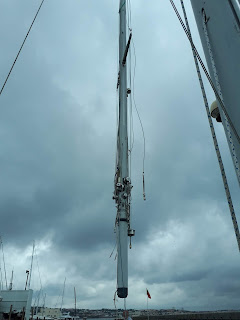 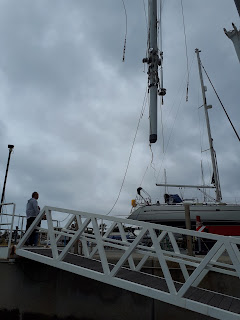 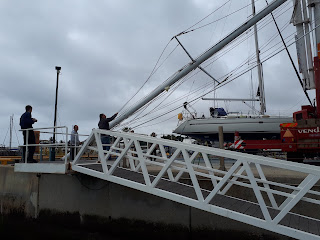 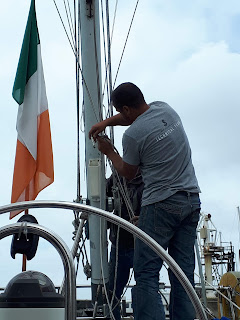 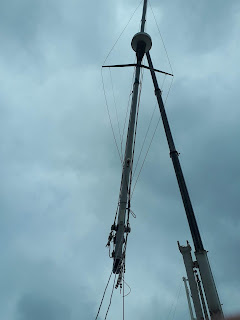 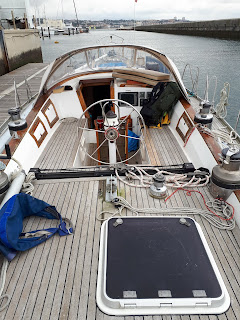 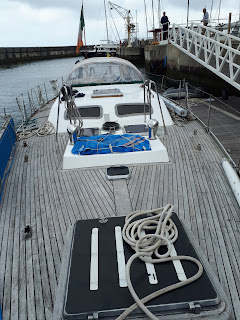