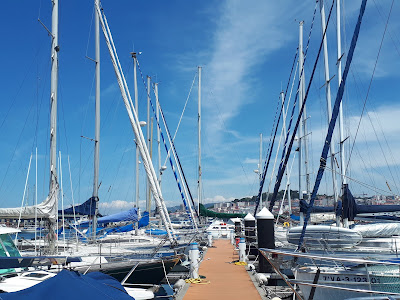 We met Alberto Lagos at the gate of the boatyard Astilleros Lagos in Bouzas, and he led us the secret way along the shore to the Liceo Maritimo. This time we were on the pontoon closest to the cafe, so a much shorter walk into town.  He said he'd been working till 3 am most days to get everything done, and he was two months behind in paperwork, including billing. He gave us a fob for the gate and left as they were launching two more boats that day.

We checked the work that was done. Alex checked the electrical system which took a bit of figuring out. I checked for evidence of leaks. What I found was a locker full of my shorts and trousers that were wet and seriously mouldy. It looked like all my favourite things were ruined. I couldn't tell how long it had been wet in that locker, or if it was still leaking. But the decks were washed and wet and the bunk and bulkheads were dry. I emptied it out and hoped for the best.

Meanwhile, we got to work. It was a gentle day, sunny with a light breeze, good for hanking on sails. First the massive yankee which went up without a hitch. When it was time for lunch, we headed up to the cafeteria and the first person was saw was Flor Long, OCC PO for Kinsale. He and Brenda had just relaunched Mis Demeana and were enjoying their stay at a lovely hotel recommended by Alfredo Lagos in Bouzas. They'd had a lovely dinner at a restaurant they couldn't remember the name of but it had "white tablecloths". We laughed and compared notes until it was time to get back to work.

After lunch we tackled the mainsail, for which Alex pivoted Aleria away from the dock until she was pointed into the wind. When that was done it was 3:30 and I decided to try to get the laundry done to see what I could salvage.  I remembered the lavanderia here is one of those industrial coin-operated ones down a little street off the street with the market. Presto bingo, I found it on the first try. While the 17 kg machine churned with extra detergent, I whizzed off to the market. I'd forgotten it was now a Froiz supermarket. So I stocked up on a few necessities, deciding we'd do the main shop on Saturday.  I trudged back with my groceries and laundry folded on my trusty cart. The laundry had turned out much better than expected. A few things were somewhat wrecked, but the mold seemed to just roll off the synthetic fabrics. I suppose there's good value in synthetics on a boat. My light blue jeans -- all cotton -- were seriously splotchy but Alex says they look tie-dyed and trendy.

The forecast was for rain on Saturday so we got the dodger up and done, and finally relaxed with a drink on deck before searching for a dinner venue. Day 1, a great success. Alberto texted that they were amazed at how much work we got done in one day. Hah!

We walked the town and checked out the places that were hopping. It was early by Galician standards only 9 pm. But I saw a sign for Carpenteria, and I remembered we had tried to get in the last time but couldn't as it was booked solid. This time we got in. It had white tablecloths - we laughed when we saw them. The waiter was very formal and the service was quite attentive. We selected a nice albarino - they didn't have a house selection - a tuna carpaccio and arroz con seafood to share. The dinner was spectacular. The tuna was to die for. We had room for dessert for once and both had the mascarpone cheesecake with fresh berries. I ate the whole thing, and I never eat dessert.

After the full day of working, eating, and drinking, we fell into our bunk like the living dead. The world and all its perils and evils just washed away into oblivion as the water gently lapped against the hull. I love sleeping on a boat. Especially ours. 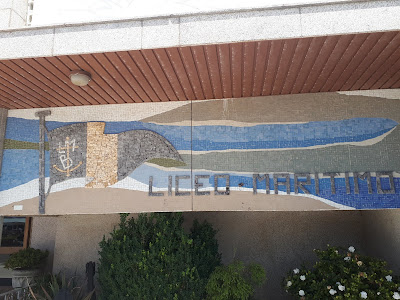