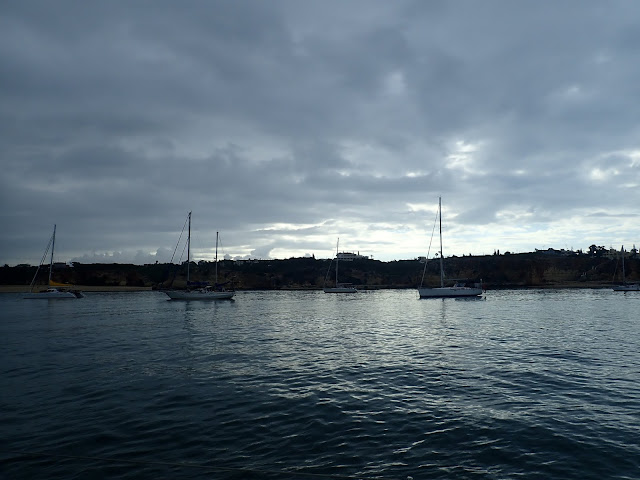 The morning started off heavily overcast and cool, with sprinkles from the sky wetting the deck just before breakfast. The anchorage was calm; there had been a slight swell overnight which rocked the cradle pleasantly all night long. Aleria doesn't mind a bit of swell. At 30 tons, she rocks gently, pointing into the wind and swinging with the current. Some of the other boats weren't faring as well, rocking more energetically as the tide turned against the wind and kept the boats aligned beam to the incoming swell. We slept well as we always do at anchor.

Alex launched the dinghy while I posted several blog entries. My internet access in the anchorage using my android mobile is far better than it had been at the marina. The WiFi there was appalling and the mobile signal changed with the rise and fall of the tide, an anomaly I had never noticed before. As the tide went out, my range decreased over the surrounding buildings and boats. Here in the anchorage I was even able to download a video rather quickly, which would have been impossible in Cascais. What a shame that a high end marina doesn't care enough to provide WiFi, a basic necessity in today's world with sailors working and banking aboard around the world as they travel.

Alex was eager to go ashore. His last visit to Portimao was some 45 years ago but he remembered it fondly. It's where he devised the plan for his oyster hatchery in Ireland on the back of a napkin all those years ago. We packed up our ruck sacks and got in the dinghy. But where to land?
Alex had noted a boat flying the OCC burgee toward the back of the harbour so we rode over to introduce ourselves. Lee and Kristin Mathews and crew member Paris were aboard Delphinus, a Warrior 40, heading for the Caribbean and an extended cruise. They were new OCC members, having re-joined after several years away after their first Caribbean adventure. They were full of local knowledge and previous experience in the Algarve and Gibralter.

Soon we were following their instructions to tie up at the pier in Ferragudo where the small fishing boats came in but to beware of the slippery ladders. It was a little bit of a challenge but we made it. It's getting to be a pain with a knee that just doesn't want to work. Ferragudo is across the river from Portimao and the more interesting of the two. A charming Portuguese fishing village rather than a postmodern city. We'll save Portimao and Lagos for other days.

We walked the entire town. Up flights of stairs to the church where a funeral was underway, down to the castillo overlooking the harbour where the poet Coelho de Carvalho had lived before the state took it over - but alas it was not open, and into the centre of town we walked. Just when I was about to give up, we came upon a restaurant with the magic word 'sardinhas' written on a blackboard. A simple place called Babalu and packed with locals and a guy cooking fat little sardines on a grill in front. Jackpot. Two cervejas, delectable bread, a platter of sardines, a plate of salad and some delicious golden potatoes and we were refreshed and ready to take on the touristy part of town.

Ferragudo presents an interesting blend of ancient and new, well maintained and decaying, regional and foreign-influenced. We discovered the main plaza outlined by benches and filled with tables of tourists all facing the various TVs that had been set up around the periphery. It's World Cup time and the Portuguese are serious about their football. Girls have bought their Ronaldo beach blankets so they can lie on top of him all day. Even though they are out and Ronaldo won't be making another appearance, there is still much to be witnessed. The Russians have scored an upset as have Belgium. Periodically, a roar goes up from the crowd and we know something big just happened.

After a while we got tired, retrieved the dinghy and set out for home, but not before checking out the marina across the river. Suddenly, the engine cut out and Alex had to row the entire way back to Aleria against an incoming tide and oncoming breeze. He was convinced it was gunk in the carburetor but it was really just a pulled out askew kill switch. Oh well. Another lesson learned.

At around Angelus time, a dinghy approached with the Delphinus crew. We invited them for drinks and shared our trove of useful information from shore leave. They were heading for the square to have dinner and watch the evening match. For us it was spaghetti Bolognese and salad aboard, nice red wine and reading.

We are in sailboat heaven. Cruisers at anchor at last. We got up this morning and asked, 'So what do you want to do today?' Nothing we both decided. Maybe go to a beach later on, or not. There are lots of nice ones all around. We have such difficult decisions to make. Or maybe not.