We pulled up our anchor at 9 am yesterday morning and were underway by 9:30. Hecuba had left long before us – they were gone by 7:30 when we got up. We set our sails close to shore and opted to follow the coast so we could get a look at some of the places we hadn’t had a chance to explore, places like Carvoeiro, Benagil and Albufeira. It was a beautiful morning and we had a nice land breeze filling our sails on a port tack heading down the coast.

We noticed that the cat sailing a bit farther out had no wind and that the sailboat a few miles out was on starboard tack and heading in the same direction, probably on a sea breeze. We stayed close to shore to stay with our private wind.

It was an interesting coastline. We watched the cave tripping boats going in and out of caves cut out of the sandstone cliffs. It’s supposed to be one of the most extensive cave systems in Europe.  Small boats go out in the morning before the afternoon northerlies kick up, allowing them to take tourists into the caves, where sunlight filters through holes in the ceiling. We could see houses built over these enormous caves, not something I would like to contemplate.

It’s slightly more than 30 miles from Portimao to Olhao near Faro. John Duggan and crew Jeff had asked us for dinner aboard Hecuba the night before and told us about the anchorage at the barrier island of Culatra. That’s where we were heading as was Hecuba. We planned to meet up there the next day.

Unfortunately, Alex started to feel sick. He was dizzy, nauseous and everything hurt. All his joints were painful and he was cold when I was pretty comfortable. The same symptoms I had had when we went walking in Ferragudo, when he kept pushing me to do things and I kept saying that I couldn’t. It must be a bug that I picked up somewhere and so kindly shared. Alex slept a good deal of the way. At least now he knows I wasn’t just making things up.

We sailed beautifully, a gentle 4-6 knots, until slam – the sails jibed. We were suddenly on a starboard tack. Sea breeze. That stayed with us until a couple miles off when the wind went to sleep and the iron jenny came to life.

Topographically, the region was dramatically different than what we had seen until now. No more cliffs. Now we saw low lying sand patches and dunes, with low hills beyond. We watched the planes landing in Faro seemingly along the beach in a city in the sand.  Lots of small sailboats came out for a nice sail on a Friday afternoon. The sun was hot but the wind was cool.

It was 3 pm when we arrived at the entrance to Faro, dead low tide. We entered between the breakwaters and the two lighthouses.  The charts showed a depth of 7 feet across the channel at MLW. We anchored in a very pleasant anchorage just where the channel splits to go to Olhao or to Faro. The entire area is sand flats, intriguing. We tidied up as we waited for the tide, but today’s range was only 2.5 meters.

We lifted our anchor and tiptoed into the main anchorage at Culatra with a flaky depth sounder and my android running Navionics in my hand as I steered up the creek. Alex kept having to reset the sounder. But we never had less than 16 feet on the way in.

The anchorage was nearly as crowded as Block Island when we arrived but there was still plenty of room and we tucked neatly between two German boats. There were boats from all over the world anchored here, some it appeared had been here a while.  Hecuba was just a few boats away. We tried to hail them on the VHF but they were ashore, having beers at the new concession stand on the beach on the Atlantic side. We met them for dinner at Jacoba, the first fish restaurant you come to ‘in town’ as you come ashore.  Two carafes of wine, sardinhas and squid, and a lovely evening passed quickly.

Hecuba was off in the morning heading for the Guadiana River that separate Portugal from Spain, our next stop but not for a day or so. Alex was still feeling pretty awful so we rested all morning and had lunch aboard before doing shore leave. Several years back, they had built a small craft harbour on Culatra. It is chock full of small fishing boats in a cheerful state of disarray in the harbour. There is a section of pontoon left clear for dinghies, which was much appreciated.

The island itself is very interesting. There are about 3000 residents and no cars, but plenty of old tractors that plow through the deep sand. The island is essentially a wide sand spit. The village has block houses, some of which are very plain, others highly decorated with interesting or curious gardens. The people are very nice and welcoming. There are two shops, an ice cream store, a shop selling beach items, and a shop selling tourist gifts like T-shirts. There are several restaurants, essentially where someone poured a concrete patio in front of their house and put in soms plastic chairs and tables. The décor is plain but the fish is fresh and simply prepared.

There is a new board walk across the island to the Atlantic side which is one long beach with impossibly deep white sand and turquoise sea under vivid blue skies. The occasional boat slides along the horizon and gets swallowed into the harbour.

There are umbrellas and lounge chairs to rent on the beach and a toilet just at its entrance. Some enterprising islander has set up a little hut selling beer, water, soft drinks and snacks from a solar powered hut. There are lifeguards there now and people come by the ferry load on weekends, but it’s otherwise pretty empty along most of the stretch.

Where sand spits jut out into the ocean, people dig clams with their feet in the sand, pulling up tiny clams in small quantities which give them much pleasure. Pretty shells litter the beach, and we got all excited when we thought we’d found ambergris, but it was not. I jumped in for a short swim, which was refreshing. The water was very clear but still Atlantic cold. The silkiness of the water on my skin felt lovely.

We walked back along the board walk across the dunes as throngs approached heading the other way – day trippers probably just off a packed ferry from Faro. We admired the homes along the ‘main street’ and bought an ice cream. We wondered how bleak it must be during winter gales out here on a strip of sand. But apparently there are boaters, especially Brits, who hole up here in the sand flats for overwintering aboard. When it gets too bad, they take the ferry to Faro from where it's a short walk to the airport, and they fly home for a spell.

But we’d reached the end of the road, Alex was still under the weather and it was time to go home. Aleria was welcoming in the harbour. The boats all lined up in the same direction paying homage to the wind presented an orderly face to the world of visitors who pointed and took pictures of their favourite ones. Aleria was in many of their photos, we know. She has that look of interesting seafaring tradition, a sexiness that new boats haven’t acquired. Our oasis, very comfortable with her sun awning up.

The occasional jet passing overhead on final approach to Faro was not even a bother, except at night, when they had landing lights directed below and lighting a swath through the harbour. Not to worry, it made finding our boat super easy on the way home. 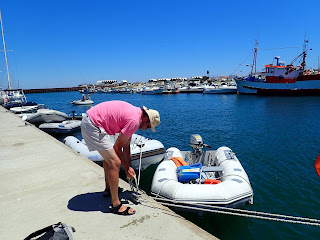 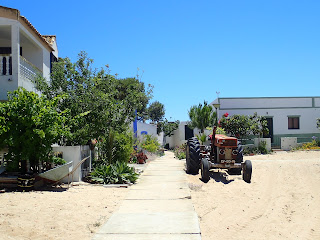 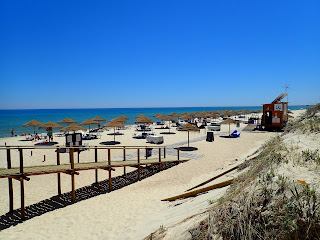 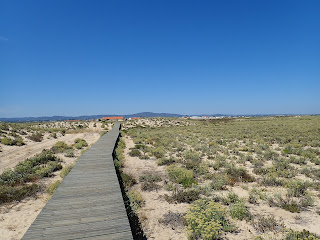 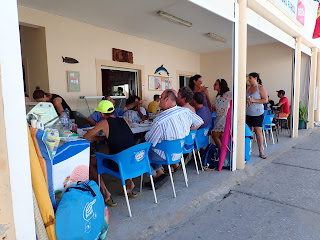 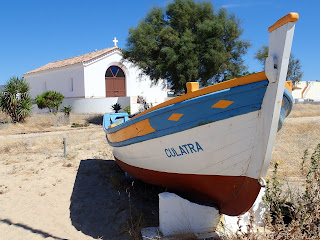 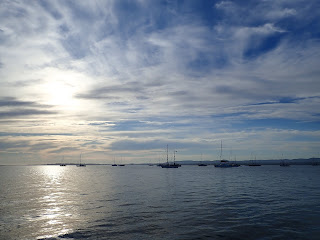 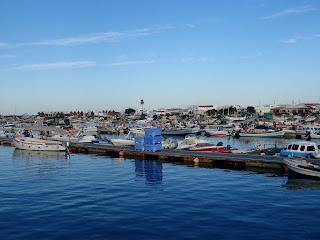